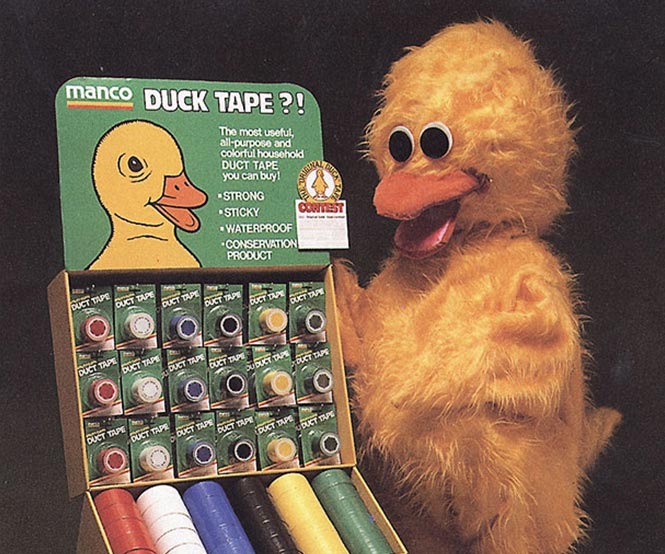 I’ve always had a knack for getting excited about projects that were way too young for me. As a junior in high school, I finally saw my opportunity to create the classic baking-soda volcano, so I took it. As a grown-ass woman, I make scrapbooks with patterned papers and themed stickers.

In between those two atrocities, I made a duct tape tote bag for a college marketing class. And then went on to carry it around. During the same presentation, I forced my classmates to make a duct tape wallet. I know what you’re thinking; the answer is no, I did not have friends in college. But, despite my childish, can’t-we-just-make-shoebox-dioramas-forever? approach to all school projects, I got an A.

The thing is, Duck Tape® really knows what they’re doing. What was once just part of a catch-all joke aimed at demeaning do-it-yourself dads had become a trendy product with endless uses. So while my classmates were researching the staying power of Michael Jordan’s brand and the inner workings of the Pepsi challenge, I was diving into a roll of tape. A versatile, impressive roll of tape.

A Sped-Up History of Duck Tape

Sometimes, it’s hard to imagine a time when duct tape wasn’t always just a thing. But obviously everyone has to start somewhere. The adhesive fabric tape was invented during WWII for American soldiers to put to use on everything from repairing broken windows to making temporary bandages, but at the time, it had no specific name. After the war, the easily tearable tape was used on ventilation ducts—hence the name—and took on its famous silver color.

The Melvin A. Anderson Company, which started out in the 1950s as a tape distributor, latched onto the growing popularity of the tape and began distributing duct and electrical tapes to factories. About 20 years later, Jack Kahl acquired Melvin A. Anderson and renamed the company Manco, Inc.

In the late ’70s, the company created the recognizable green brand color and used it to package duct tape for retail, which no company had done by that time. In the 1980s, Manco, Inc. continued with firsts (by introducing mailing and moving products into retail—hellooo Bubble Wrap!) and branched out into other products (weatherization products!). But perhaps most importantly for their main product, they added Duck® and Duck Tape® trademarks to the brand. And 30 years after that, they’re still hanging around.

It certainly helps your image when you have a solid product that’s used globally and could almost sell itself, but there are a few Duck Tape marketing tactics we think all brands should adopt. Here’s a look at why we think Duck Tape might just outlast us all.

1. Match your brand to your culture.

Duct tape wasn’t always so fun. I mean, what’s fun about tape you put on your HVAC system?

But for one company, through years of different ownership and brand identity changes, the popular tape became Duck Tape, which would be nothing without a named mascot. In the early 80s’, Manco T. Duck was created by a former Disney artist to exemplify the corporate culture and commitment to be fun, imaginative, and resourceful.

Introducing the fun-loving mascot naturally led to production of non-traditional tapes—wildly different colors, cartoon characters, sports team logos, even bubble gum scented!—that proved the company behind them is creative and doesn’t take itself too seriously. “We’re a little quirky in some of the things that we do,” CEO John Kahl once told Smart Business. Honesty in branding and marketing helps build trust, and trusted companies more easily stand the test of time.

By now, you’ve no doubt caught wind of clothing made from Duck Tape, but did you know that Duck Tape hosts an annual “Stuck at Prom” scholarship contest that rewards teens who create unique prom-wear using Duck Tape?

This not only keeps up the brand’s light-hearted image, but encourages user-generated content. Consumers post and share images of the creative possibilities of Duck Tape without Duck having to do a thing (aside from shell out some dough to the winners).

User-generated content helps promote your brand because followers and friends of one of your satisfied customers will see their “review.” If you don’t have a Stuck at Prom-level presence, encourage people to share pictures, videos, or gifs on social media by offering incentives, like a free gift, discount, or feature. When people participate, social media automatically acts as your own personal word-of-mouth marketer.

3. Engage with customers in real time.

Social media also makes it easy for you to engage with your customers in real time. While, admittedly, Duck Tape came up with the Stuck at Prom idea after seeing that students were using their product to get creative with their prom outfits, they also aim for heartfelt two-way conversations. When customers take the time to express their disappointment or satisfaction for all the world to see, Duck Tape is on top of it.

It’s important to have someone in your marketing department spend time each day monitoring social media channels and responding to anything that might warrant it—positive or negative feedback, questions regarding products/services, or conversations surrounding your company brand. But remember, social media was originally intended for people to make personal connections, not to promote their companies, so put thought into your responses to social comments.

Keeping your product or service (or, if nothing else, your image) fresh and reinventing your brand can increase your company’s life expectancy. You might think you—and you might actually—have a solid offering, but you can’t rely on that one product to support your sales forever. Everything gets stale after a while, even Duck Tape.

That’s why they’ve updated their logo to look a little less ’70s, renamed their mascot to Trust E. Duck, and introduced specialty tapes.

A Brand That’s Built to Last

Duck Tape had its beginnings in adhesive for repairing ducts, but then moved to a fix-all for household mishaps and eventually branched out into weatherization and shipping products.

And don’t these products have all the makings for a boring website? Think again. The Duck Tape website is more than just an outlet for moving mundane merchandise—it’s a wealth of craft and decor ideas and a vault of video tutorials. There are even personal stories from educators, young aspiring engineers, and Duck Tape artists.

I’ll tell you, though, it was not unlike this: 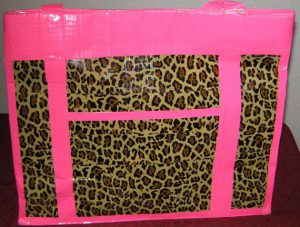 But a little less fashionable, and a lot more like an 8-year-old made it.